The land of Italian foods, wine, stunning views and lots of culture. I visited Italy when I was a child and loved it then, I still do and could easily go back to Italy every year.

This time, me and Will ventured to Rome, Naples and The Amalfi Coast.

The first day we arrived in Rome after a VERY long journey. Us trying to save some pennies, opted for Pegasus airways with a stopover in Istanbul from Dubai. However both planes ended up being delayed for hours upon end so I think after that we vowed not to go for the cheapest plane option ever again!

Anyway, the first day we arrived at our lovely little airbnb in central Rome just behind the Colosseum. It was very quaint and typically Italian. It was the middle of the day and we were eager to explore so walked past the nearby Forum, (a big tourist ruin to go and see) and up and over the steps to the central roundabout of Rome, Piazza Venezia. Here stands the tall, grand building, Vittorio Emanuele II Monument. You can climb to the rooftop of the building from the inside and it was a great first view of Rome, including the Colosseum in the distance.

I love Italian food, so one of the first things we did was go to a local sandwich shop to buy a parma ham and mozzarella cheese focaccia and sat on a park bench taking in the views of the city. It sounds silly, but this quickly became one of the most memorable moments of being in Rome, due to a long overdue flight, being able to eat REAL pork and sit outside without sweltering (living in Dubai can sometimes have it’s drawbacks) and the feeling of yep, we are on holiday…

Whilst in Rome, we did all the usual touristy stuff, visited the Colosseum of course. We actually ended up having a guide for this, as we were lazy and didn’t get up early to beat the queues so paid for a guide which was more like pay for a quick entry as she did a whistle-stop tour of the Colosseum, so we decided to leave the tour and take our time. It was beautiful to walk around this incredible historic site and imagine the events that once occurred in between these walls.

The Vatican was simply extraordinary, the art, the detail, the history was a lot to take in, especially when it was so busy- trying to keep up with the tour guide was tricky! Luckily we had headphones so you can tune into your tour guide even if you are not stood next to them. Will is a massive history geek so he lapped up every tiny detail, while I was more interested in the art and taking photos.

Another must is the Fontana Di Trevi (Trevi Fountain). At the time we visited, it had a glass platform across the top for a fashion show! This did slightly lose the majestic effect, but it was beautiful to see nonetheless.

During the rest of our 4 nights in Rome, we ate A LOT of pizza, pasta, bread, ice cream and drank A LOT of wine. Personally I think this is what visiting Italy is all about in order  to fully appreciate the culture 😉 We also found some cute little bars and restaurants down idle allies. Don’t be afraid to lose yourself in the little lanes as that’s where we found some of the best little places. (Tip – if you do get lost make sure you pin wherever your staying on Google maps and save it, then you don’t need internet to find it!)

So next we headed down south to Naples. We decided to get the train down as we had heard good things and how easy it is to get the train. We bought our tickets, after a long wait at the train station the day before, just to be on the safe side. Unfortunately, the train journey was awful, but that is definitely down to the fact we bought the cheapest tickets going! I would get the train again but go for the air conditioned trains with less stops along the way! Anyway, we finally arrived to Naples, feeling very sweaty and tired after a long journey to pick up our hire car from the station. This was an event in itself, the people not being the friendliest, it took forever and we ended up with a car that I can describe as nothing else but a lunchbox… with tape around one of the wing mirrors! In the long run, we were glad about this, because driving along the Amalfi Coast was pretty narrow and any slight bumps we may have incurred went unnoticed upon return!

We then set off in our lunchbox to drive down to Salerno. Now I am not even going to bother writing about Salerno as it is not a place I would recommend to visit. We spent 2 nights here, as with doing little research we soon realised there is not a lot to do, other than it being like any other small seaside town. So one of these days we set off to visit the town of Ravello, which was just along the Amalfi Coast. 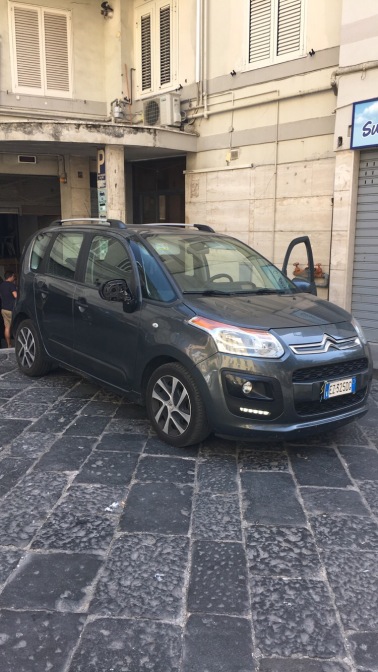 This was probably one of the highlights of our trip. It is one of the most beautiful views we saw during our time on the coast, and one we will always remember. It was also a huge pick me up after feeling down about staying in Salerno.

We walked around the historical town, visiting old buildings and spotting a few weddings along the way, including (I later found out) some one I went to school with. We stopped for lunch and had wine, bread, cheese and meat – we felt like we were in one of the best places in the world, with a view to die for. It was quite a small town, perfect for a day trip but I wouldn’t recommend staying there for more than 1 night, as it is quite far up the mountain and not that close to neighbouring towns. However definitely not a place to miss! 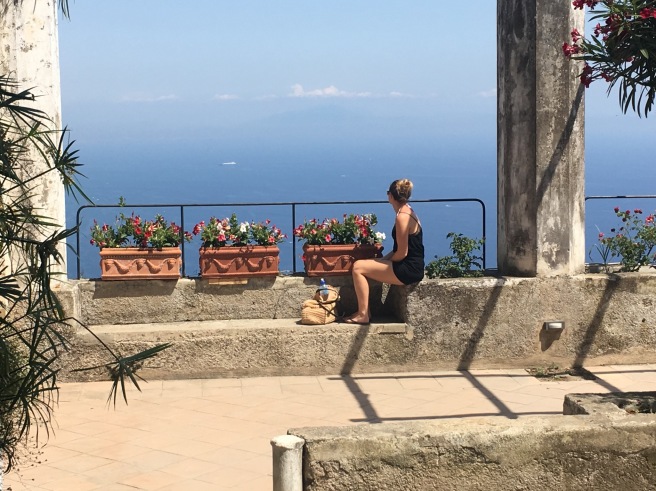 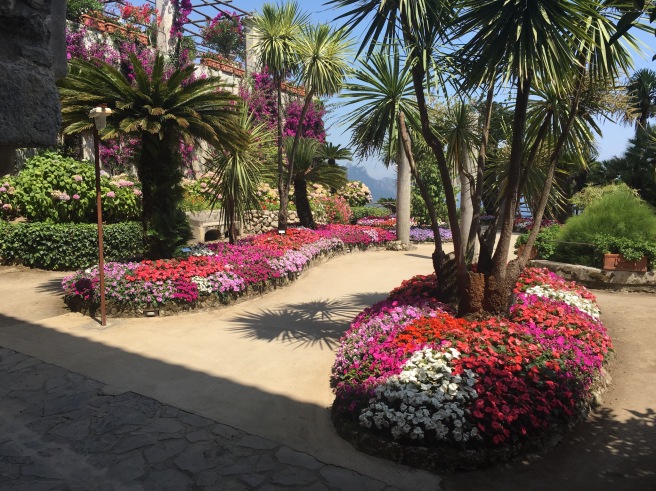 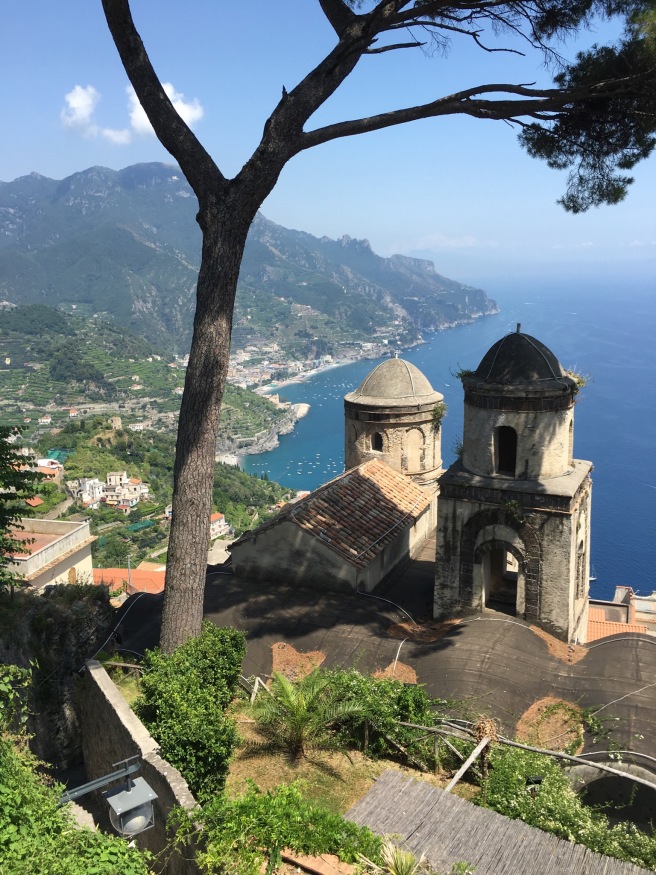 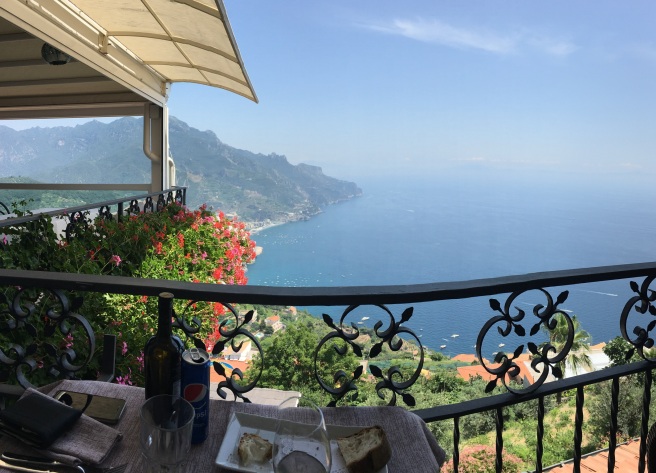 After Salerno we packed up our things and were excited to stay in our next place in Amalfi. We stayed right up in the mountain in a cute little B&B called Villa Maria. We sat and had breakfast on the terrace with the most amazing views every morning across the mountains. Whilst here, we could get a bus down to the sea easily to spend some time in the seaside town. We spent a day at a beach club, and hired sunbeds with umbrellas. It was perfect, although a little pricey, but totally worth it to relax in the sun for a day.

We then moved onto Positano. This was my favourite place. There were some of the most amazing places to stay here, but the prices were unbelievable (not cheap)! We found a lovely B&B, which was not too far out of our price range, called Villa Yiara. It was just what we needed and had beautiful, traditional rooms with a balcony overlooking the town. In the morning, they bought us breakfast to our balcony and well the picture below says the rest. 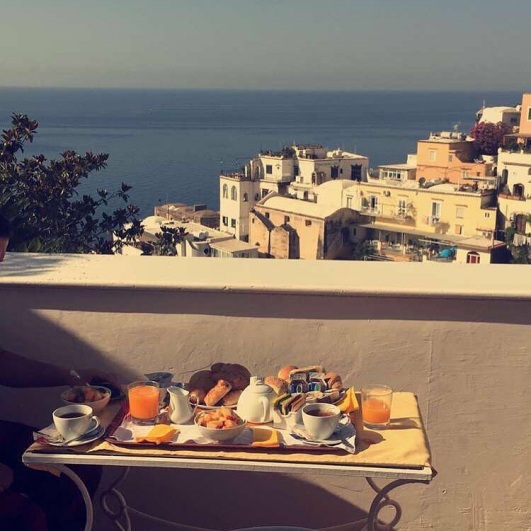 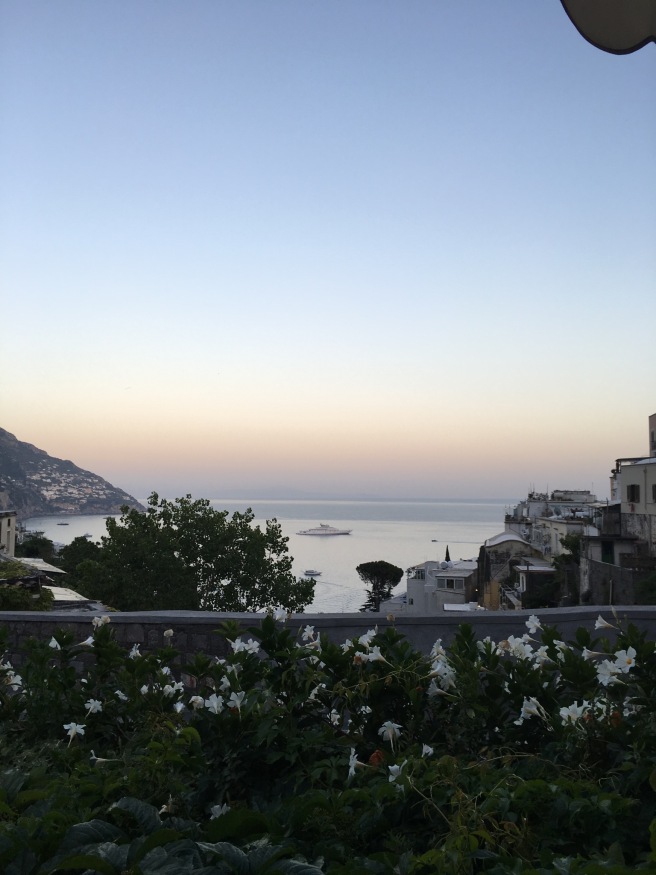 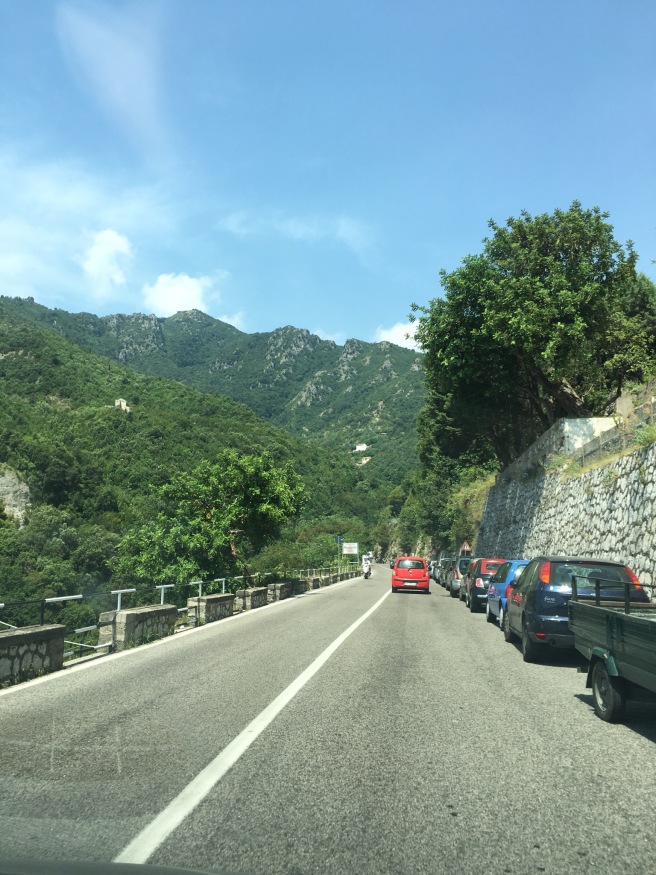 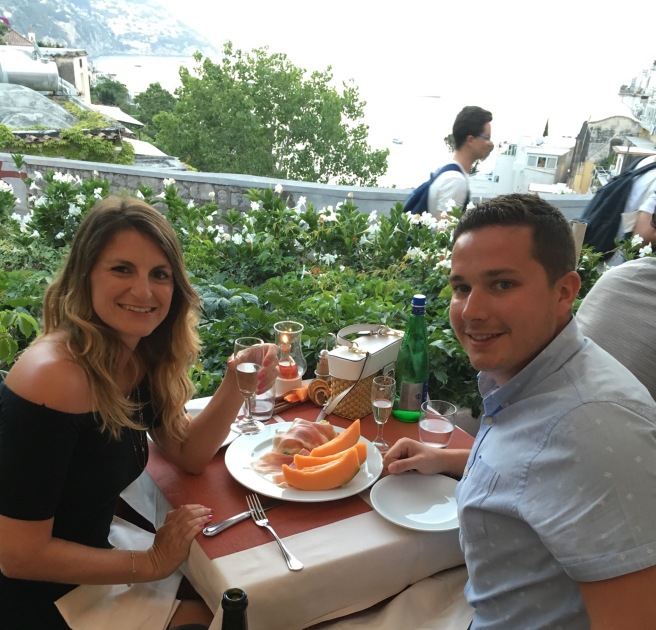 We then set off for our final leg of the journey, we stayed in Sorrento for 2 nights. Sorrento was a lovely seaside town, however again quite pricey when looking for places to stay. We always use booking.com as it often gives the cheapest deals as well as giving you a rating. Sorrento is great to walk around and I suggest staying near the centre as much as you can. It has plenty of little lanes to walk around at night and has a general buzz. The only trouble is it has quite a small beach, so we ended up paying for sunbeds on a wooden pier.  Lots of places have set up decking over the water, but charge a lot, so be careful not to get ripped off! The best option is to stay somewhere which already has a pool, if you like to sunbathe like me!

One of the days we were in Sorrento we got a boat over to the nearby island, Capri. When you arrive by boat, you then have to get a cable car up to the top, this is pretty much a vertical cable carriage which takes about 5 minutes. Capri is beautiful and I would suggest taking your walking shoes if you like to explore, as there are lots of walks you can do around the island. When we arrived the heavens opened and it poured with rain along with some thunder and lightning. We sat and had hot chocolate in the pouring rain in the tiny city square, watching people running from place to place. When it did stop raining, we walked up to an old castle and around the ruins, this also allowed to take in views of the whole island. We walked around Capri all day and visited some beautiful gardens, we got lost around the edge of the island in the rain, and found a deserted cave to protect us from the rain (pictured below). After realising the rain was not going to stop, we trekked up some unforgiving steps and found an old, beautiful restaurant on the edge of the cliff for lunch, where we had soup to warm up!

Just a note, Capri is very expensive so make sure you are not on a budget when visiting here as you want to enjoy it properly. Also one of the things we didn’t do (because of the weather), was take a boat around the island and visit the Blue Grotto which in pictures looked amazing. I would recommend doing this if you have time. 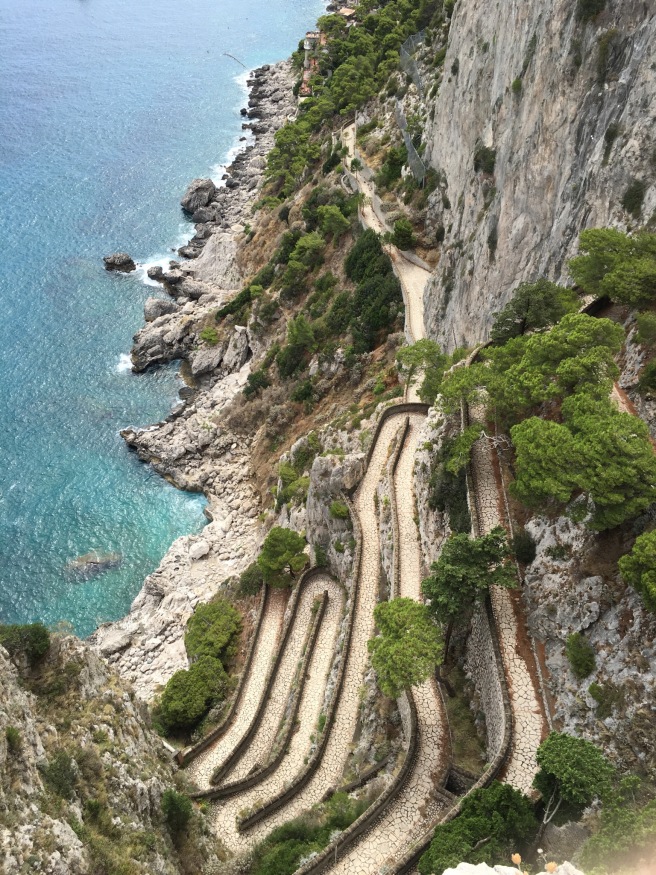 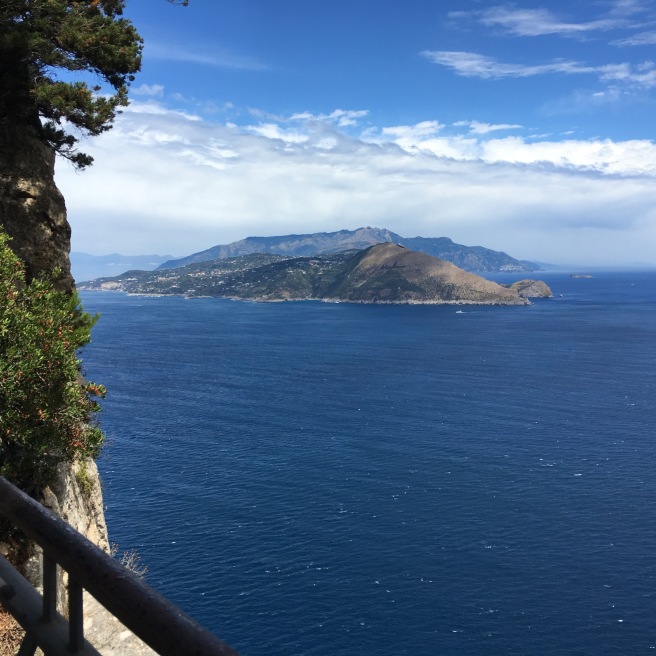 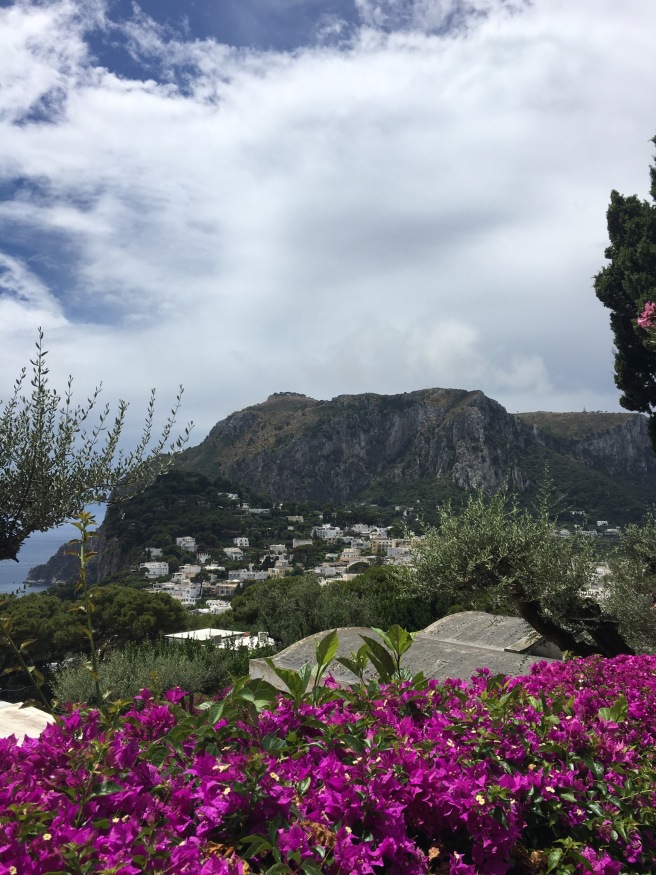 On our last day we travelled back to Naples to stay for 1 night before heading home the next day. On our way back to Naples we had to visit the historical ruins of Pompeii. We were both very excited about this, and it did not disappoint. We bought the booklet and map to guide us around the place. I would recommend getting this or buying the headsets as otherwise you have no idea what you are looking at, as tour guides are very expensive. We got here extra early to beat the crowds and for the first couple of hours we had most of the place to ourselves. We were going to get the bus up to Mount Vesuvius however after a long morning of walking we were shattered and were happy to appreciate it from where we were. 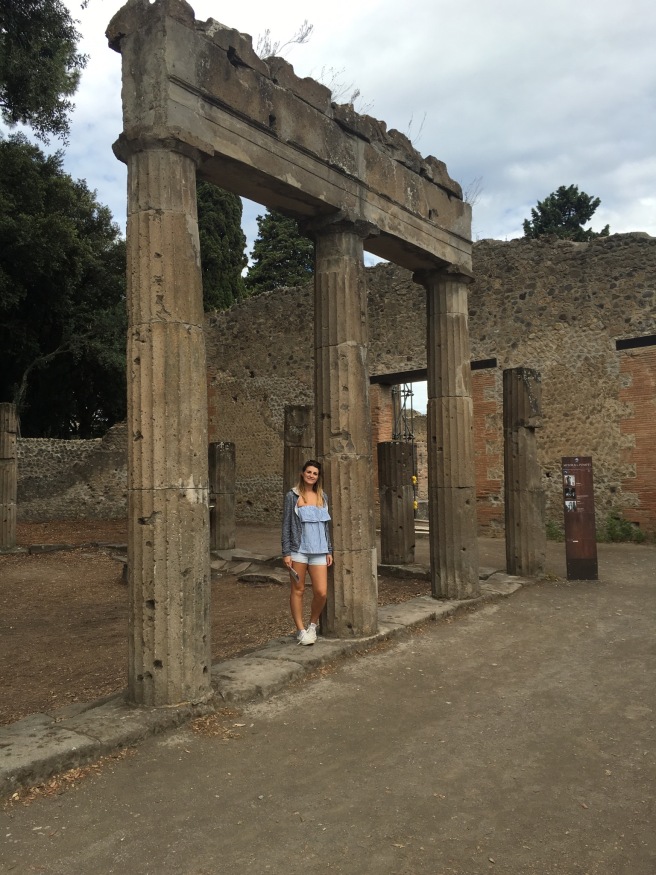 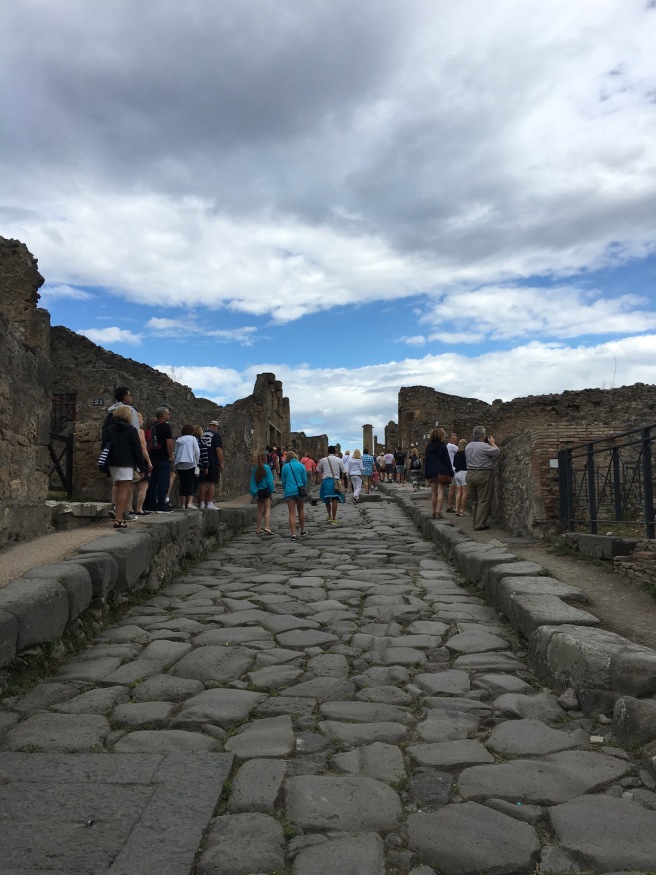 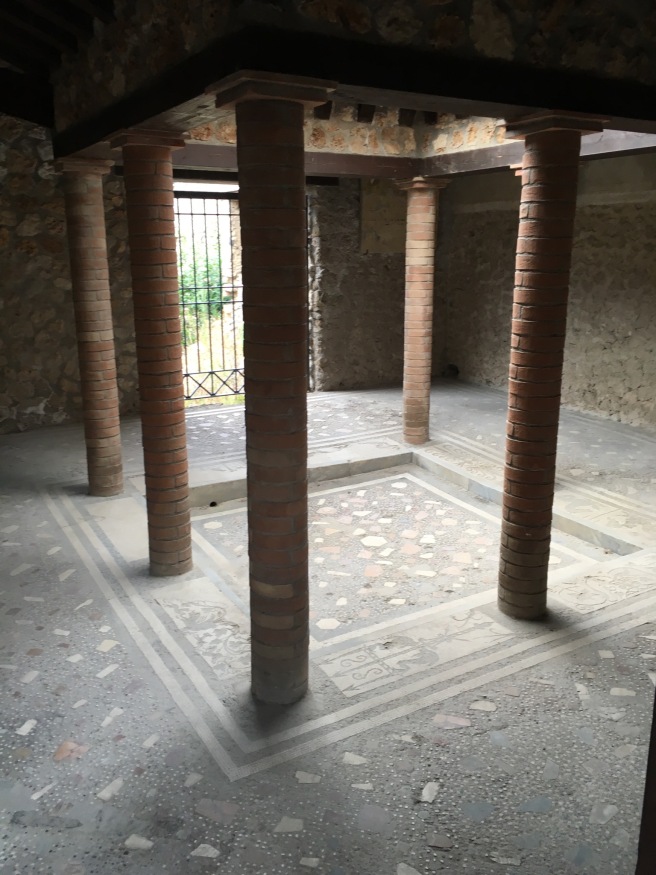 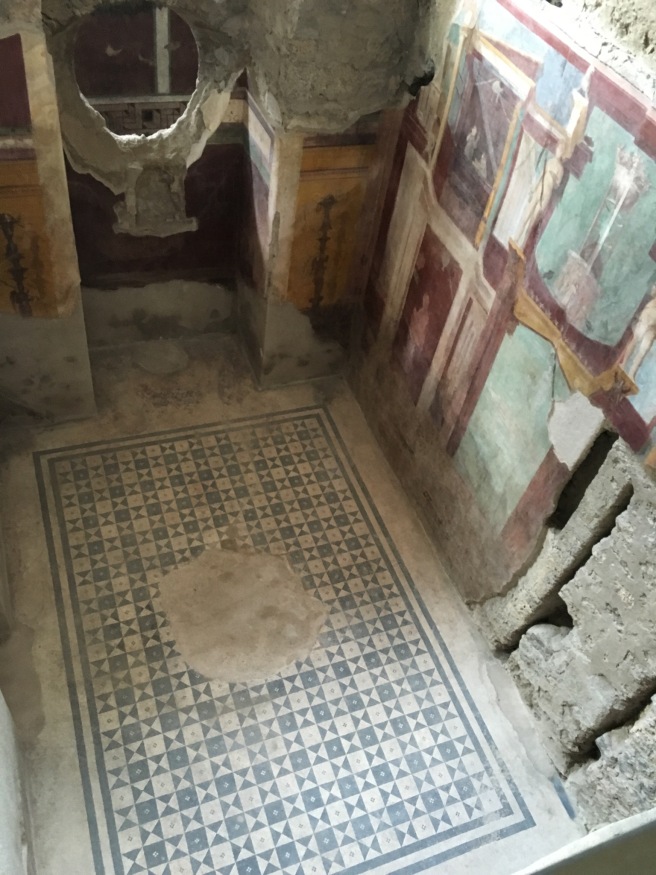 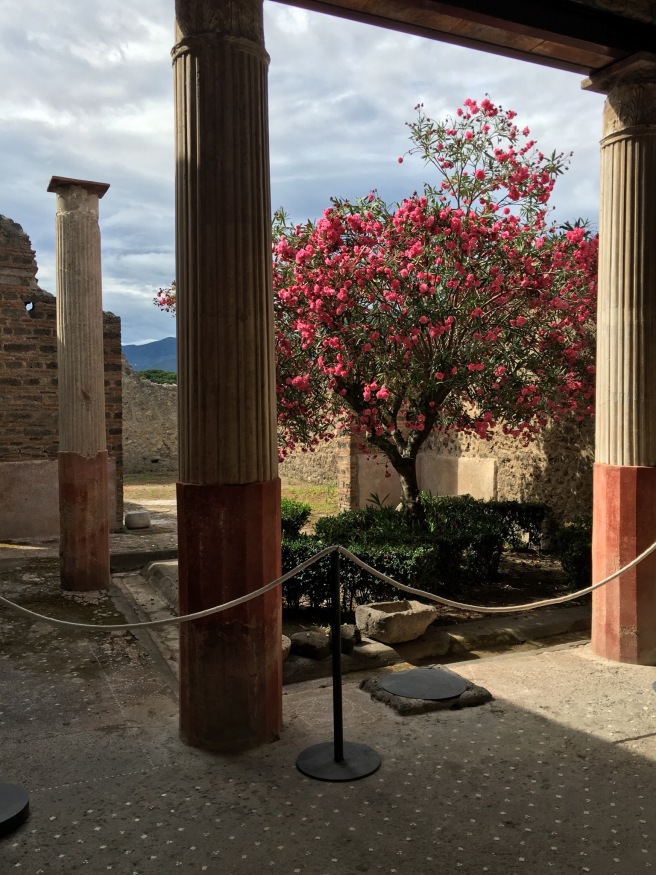 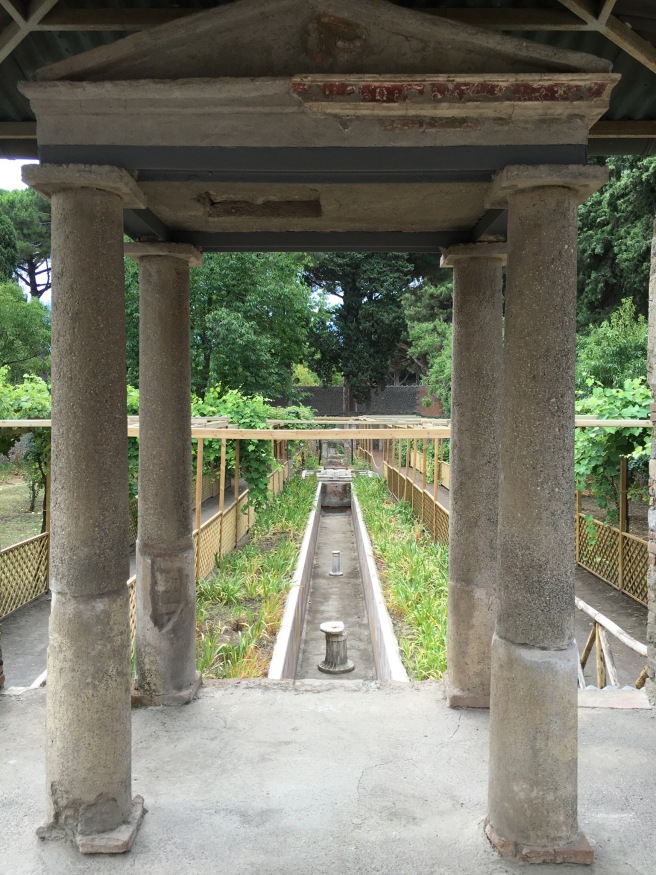 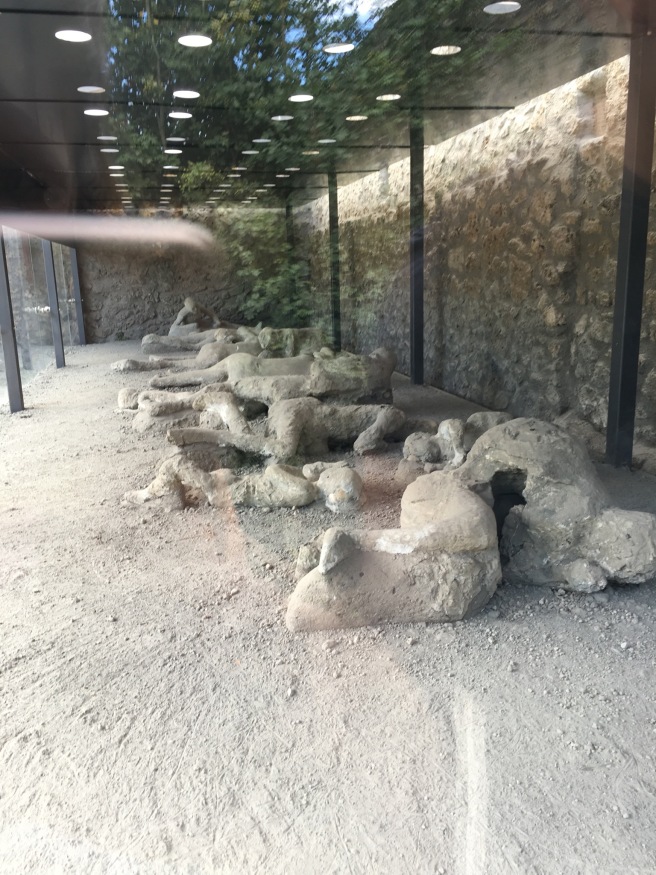 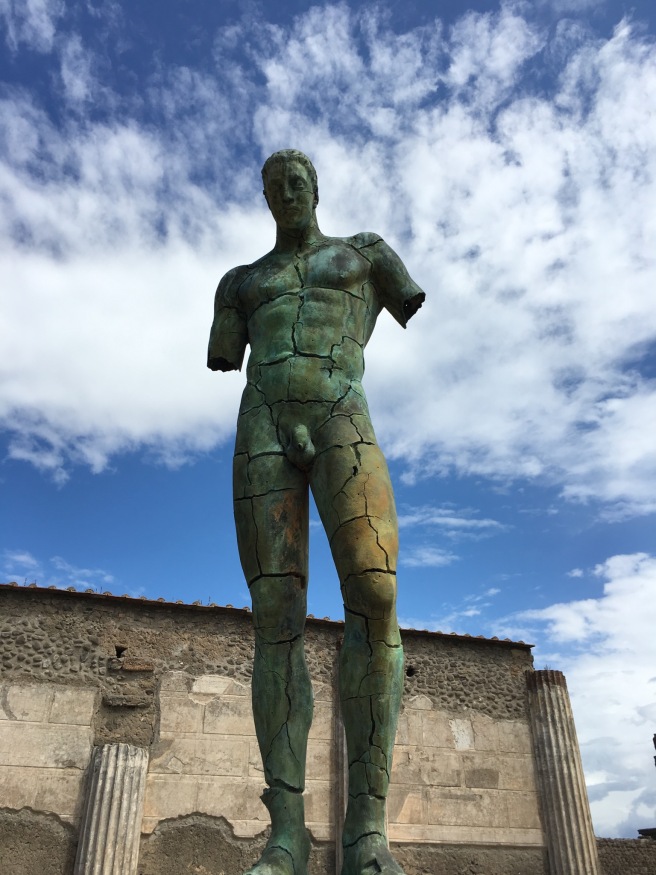 We then ventured back to Naples to stay the night before our flight. Naples was an interesting place, a mixture of quirky spots, to very religious churches, to scary back alleys. We spent some of the day walking around here and did try the most amazing snack, frittelle salate napoletane, basically a pizza in a fried ball, but it tasted delicious! (However I would suggest sharing one, as it’s probably a cardiac arrest waiting to happen!) We also visited the ‘Church of the Dead’ which was pretty spooky to say the least…you can’t miss it with the skulls on the outside of the church!

Finally it was time to head home after a fantastic trip. If I visited again, I would recommend doing some research first as I would stay longer in certain places, but for us that is sometimes part of the adventure. Having low moments, which only make the high moments so much better.

I hope you enjoyed my post and it encourages you to visit Italy.

View all posts by mywherenext